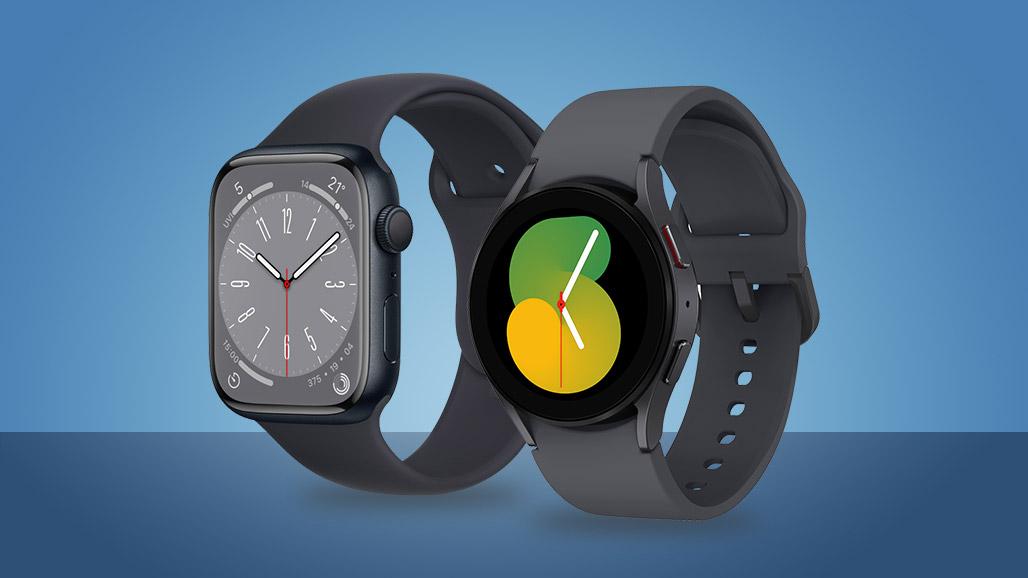 If you’re currently looking for a smartwatch or think it’s time to upgrade, the Apple Watch Series 8 and Samsung Galaxy Watch 5 should be on the top of your list. Both sync easily with your smartphone, so you can listen to music, manage notifications, and track your health and workouts.

Taking that into account, which smartwatch should you choose? If you’re well informed, you could end up buying a watch that’s either missing some essential features or incompatible with your type of smartphone.

If you’re having trouble deciding between the strongest brands in the smartwatch industry, we can help. Read on to find out how the Apple Watch Series 8 compares to the Samsung Galaxy Watch 5.

Prices for the Apple and Samsung Watch will vary based on your choice of case size, connectivity, and watch strap, among other things.

Winner: The Samsung Galaxy Watch 5 is the least expensive smartwatch of the two, whether you choose the Bluetooth or cellular model.

Both watches have a lightweight, comfortable design and look fantastic. Compared to the Samsung Galaxy Watch 5, the Apple Watch 8 is somewhat bigger and notably thicker. Samsung offers case sizes starting at 40mm or 44mm, whereas Apple starts at 41mm or 45mm. Both companies take a unique approach to the functionality and aesthetics of their smartwatches.

The Apple Watch 8 is available in aluminum and stainless steel. The Samsung Galaxy Watch 5 40mm and 44mm watches are made of aluminum. Titanium is reserved for the Galaxy Watch 5 Pro. Samsung uses two buttons on the side of the watch to navigate home and back, keeping with the conventional circular watch shape. Samsung trades in its physical rotating bezel for a digital bezel on the 40mm and 44mm models and a touch-sensitive bezel on the Pro. Apple continues to use a square body. For navigating the UI, Apple uses a digital crown with haptic feedback.

Both Apple and Samsung use Sapphire crystal for the glass that covers the display, which helps shield it from dings and scratches. Apple, however, only makes this material available for stainless steel models. Aluminum models have been downgraded to Ion‑X front glass.

Depending on the model you select, there shouldn’t be much difference in how the two watches feel on the wrist. Most users won’t have to worry about either smartwatch feeling significantly heavier than the other, except for the Apple Watch Ultra (61.3 grams). Users will undoubtedly be satisfied with their picks because both feel light on the wrist overall.

Winner: Only Samsung offers a Titanium body (Pro version) and sapphire crystal displays on all models. Given that, the round or square design is a matter of personal choice.

Both watches have gorgeous displays with excellent resolution. While the Samsung Galaxy Watch 5 has a Super AMOLED display, the Apple Watch Series 8 has an Always-On Retina LTPO OLED screen. Retina displays typically have higher visibility in bright sunlight. Peak brightness for both panels is up to 1000 nits.

Apple Watch Series 8 outperforms last year’s Series 7 due to its brand new S8 chip with a 64-bit Dual-Core processor. The Samsung Galaxy Watch 5 disappointingly shares the same Exynos W920 Dual-Core 1.18GHz processor used on last year’s Watch 4. The Galaxy Watch 5 has 16GB of internal storage and 1.5GB of RAM, which is more than enough storage for a watch. That’s more RAM than the Apple Watch 8, which only has 1GB. However, more internal storage wouldn’t hurt and the Apple Watch 8 delivers 32GB.

It won’t matter how many amazing features a smartwatch has or how well it performs if it doesn’t have enough battery life. The Samsung Galaxy Watch 5 (- 44mm: 410 mAh) and the Apple Watch 8 (Li-Ion 308 mAh) come equipped with the longest battery life of any watch that either company has ever produced.

Samsung claims the Galaxy Watch 5 will get up to 40 hours of total battery life (80 hours with the Pro) on a single charge. Our tests with the smaller 40mm model revealed that you could expect around half of that battery life with regular use. In addition, both Samsung and Apple watches support fast charging as an option.

The Apple Watch Series 8 promises up to 36 hours on a single charge with regular use. The battery life is going to be different from person to person. Where things get interesting is with the low power mode that each watch provides, which extends usage by a significant amount.

The Samsung Galaxy Watch 5 PowerSaving Mode displays colors on the screen as grey tones and deactivates the Wi-Fi. The mobile network can get users up to 80 hours on a single charge. The Apple Watch Series 8 has low power mode, which allows 35 minutes of app use and 3 minutes of talk, and bumps battery life up to 60 hours. That’s a nice increase but it’s far less than the Galaxy Watch 5.

The other thing to consider is that Apple’s low power mode is not available on the Apple Watch Series 8 right away. According to Apple, the option will be available shortly, so users will have to wait until they can increase battery life.

Winner: The Samsung Galaxy Watch 5 battery has a larger capacity. Still, both watches will have similar battery life with certain features turned off.

The Apple Watch 8 features everything you could need, including a blood oxygen sensor, an ECG app, and notifications if your heart rate is unexpectedly high or low. Similar to the Samsung Galaxy Watch 5, it now incorporates a temperature sensor designed for ovulation. It includes two sensors, one under the display and the other on the back near your skin, ensuring high accuracy. Every five seconds during the night, it can take a wrist temperature sample and identify variations as little as 0.1 centigrade.

The Apple Watch 8 also features a new crash detection feature that can detect a severe car crash and aid in accident detection using the barometer, GPS, and microphone.

But you’ll probably utilize the sensors on the Samsung Galaxy Watch 5 more frequently. The watch is equipped with a 3-in-1 BioActive sensor that controls three health sensors. These sensors evaluate body composition to track water retention and bone density. Measure heart rate while working out. As well as record heartbeat and rhythm to help you identify early warning signs.

Winner: It depends. There are more fitness monitoring sensors in the Samsung Galaxy Watch 5. Users could, however, prefer Apple Watch Series 8’s more accurate GPS and crash detection as a trade-off.